On March 1, 2022, NASDEA’s Board President Major Kevin Hobson of the Indiana State Police was promoted to the rank of Lieutenant Colonel.  A complete rundown on Kevin’s new responsibilities and distinguished career leading up to this promotion is included below.  From all the NASDEA membership we congratulate Lt. Col. Kevin Hobson and wish him the best of luck in future endeavors.

(Indianapolis, IN) - The Superintendent of the Indiana State Police, Doug Carter, has announced the promotion of Major Kevin Hobson to the rank of Lieutenant Colonel. Lt. Col. Hobson will now serve as Deputy Superintendent, Assistant Chief of Staff Investigation and Intelligence.

Hobson will coordinate all matters regarding the intelligence and investigative needs of the Department.  He will manage and supervise the Internal Investigation/Equal Employment Opportunities Section, the Indiana Intelligence Fusion Center Section, and Laboratory Division.

A native of Bloomfield, Hobson is a 1991 graduate of Bloomfield High School. He graduated from Indiana University where he studied Health Administration before being accepted to the 52ndIndiana State Police Recruit Academy in early 1995. In June of 1995, he was appointed as a Trooper and assigned to the Versailles Post where he patrolled Switzerland County.

Hobson worked the road for two years as a Trooper before being re-assigned to the Drug Enforcement Section, where he worked for the next nine years until he was promoted to the rank of Sergeant and served as a Crime Scene Investigative Supervisor for the Laboratory Division out of the Bloomington District.

In 2009, Hobson was promoted to the rank of First Sergeant, and he served as the District Investigative Commander at the Bloomington District where he assisted the District Commander to determine crime problems and action plans.

Four years later, Hobson was promoted to the rank of Lieutenant where he directed the activities of personnel assigned to the Drug Enforcement Section. 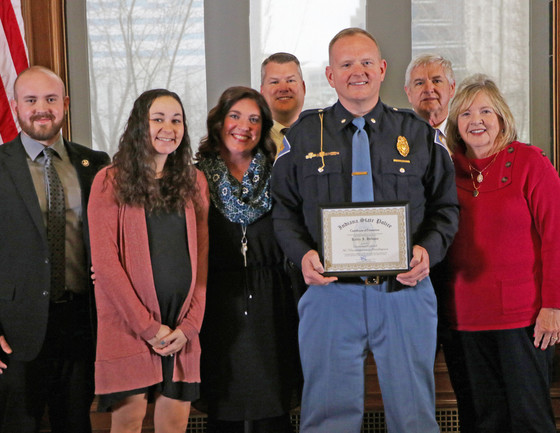 NASDEA Board creates and appoints an Executive Director